A Blunder of Olympic Proportions

When we first moved to Mineral Point, Wisconsin there were a couple of times when we would go up to High Street and wonder “Where did everybody go?”  Eventually we came to learn that when there’s a wrestling meet in town, the place to be is the high school.  Attendance at these meets, like the one last weekend (shown below) rivals the population of the town.  (Check out this short media clip.) 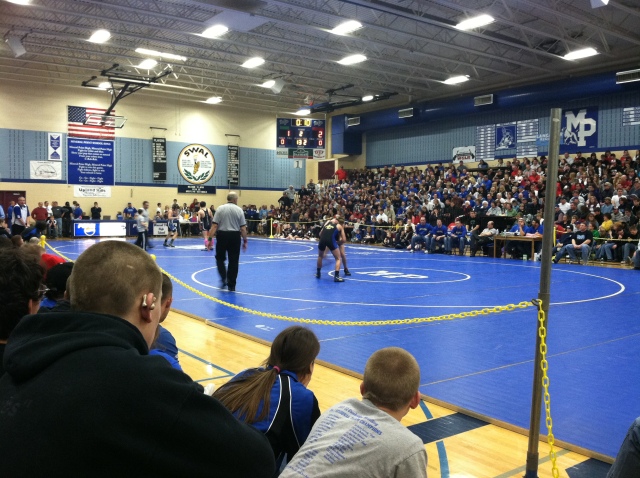 Recently, Pointers have been grappling with a surprise move by the International Olympic Committee (“IOC”) that could eliminate wrestling in the 2020 Olympics – not just Greco-Roman wrestling, but good old regular freestyle wrestling. As MP Head Coach Scott Schmitz points out, wrestling is “one of the oldest sports in the Olympics.” So true!  There are ancient cave drawings of wrestling!

Given its ancient origins and the fact that it’s one of the most basic and natural sports with no expensive equipment required, it’s hard to understand the IOC’s decision. As Schmitz explains, it takes away “the pinnacle goal” from wrestling, which could have a devastating impact on the sport —

When I started wrestling we were taught to set goals. . . . make varsity as a freshman and help the team, become a state champ, get a college scholarship, become a national champ, and then an Olympic Champion. I did not accomplish the latter two, but by not doing so, it pushed me into what I am today a teacher and coach. I feel the decision is the kiss of death to wrestling. Taking away our pinnacle goal will eliminate our numbers at the college level to the point they will begin to drop programs. High school programs will suffer as well. Interest will be lost along with great work habits and commitment. I hope and pray that they change their minds.

I was absolutely shocked when I learned that wrestling was dropped from the 2020 Olympics. Recent Olympic history has been rich with compelling stories that include Gable (1972), Blatnick (1984), Karelin (1988), Baumgartner (1992), Angle (1996), women’s wrestling (2004), and Burroughs (2012). Over 200 countries have the sport of wrestling. This decision was made without representation from America on the IOC board. Our country, and our community, were just given a wake-up call. Will we pick up and answer or place the receiver back down and snooze – “just a few more minutes”?

To answer this wake-up call, join 1972 Olympic gold medalist Dan Gable and sign the “Let’s Keep Wrestling,” petition http://letskeepwrestling.com or go to “Keep Wrestling in the Olympics” http://keepwrestlingintheolympics.com, which has several different petitions you can sign.

The IOC decision is not yet final, so the actions of these grappler groups could indeed make a difference.

2 Responses to A Blunder of Olympic Proportions