On Saturday, April 20th, at 7:30 PM, the Mineral Point Opera House will host its fourth in a series of benefits for local concerns. Opening for this show will be Ralph Kluseman, an entertainer from Platteville, known for performing the music of the Beatles, Neil Young, America, James Taylor, John Denver, Cat Stevens, Crosby, Stills & Nash, John Lennon, Paul McCartney and many, many more.  Here’s a youtube clip of Ralph performing the Beatle’s My Life. 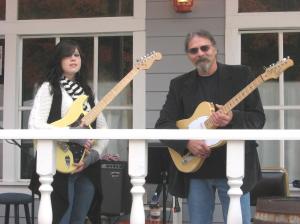 Following Kluseman will be the father-daughter duo and Mineral Point favorite – “LaBarge” who performed here last summer at “Jammin’ on the Porch.”  They’ll be performing their original tunes as well as a variety of oldies, rock ‘n roll, jazz, and blues. For a sampling of their work, check out this link to their Facebook page.

All proceeds from this concert will go directly to Pendarvis.  These concerts are the brainchild of local resident and friend of the Opera House, Dave Hopper.  January’s concert helped out the Rescue Squad featuring Cupola. In February Point Five and Rick Harris helped raise money for the Free Clinic and Better Daze blasted the House in March with a benefit for the Opera House.