The Bachelors – Coming to the Opera House 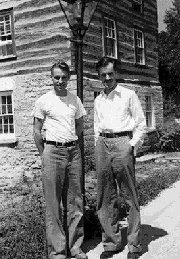 In the midst of the Great Depression, Bob Neal and Edgar Hellum paid $10 for a crumbling stone house on Mineral Point’s Shake Rag Street.  They not only managed to restore the building – thus starting a preservation effort in Mineral Point that continues today – but they converted it into a national destination restaurant.

In Mineral Point, these men are simply known as “Bob and Edgar.”  Now, a wider audience is learning about Bob and Edgar thanks to Rick Kinnebrew and Martha Meyer of Evanston, Illinois.

As newlyweds, Rick and Martha visited Taliesin in Spring Green WI and heard about Frank Lloyd Wright, his famous adultery and the tragedies that followed.  It wasn’t the feel-good love story the honeymooners were looking for.  They headed to Mineral Point, toured Pendarvis, and found what they were seeking.  They read through Bob and Edgar’s extensive papers at the Mineral Point Archives, researched the two men, and wrote a dramatic script based on the Bob and Edgar story.

The result is the screenplay, “The Bachelors.” 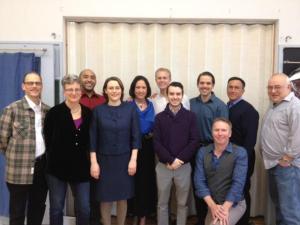 A highly anticipated enhanced staged reading of the Bachelors is coming to the Mineral Point Opera House, in partnership with Alley Stage, Sunday June 2nd and 2pm.  Tickets are available at www.ShakeRagAlley.com/alley-stage or by calling 608-987-3292.

This Mineral Point production follows a May 29th performance at Chicago’s Stage 773 and a January 2013 performance in Evanston.  Here are two clips from the staged reading in January  — “Men who like . . . tea” and “A $10 House.”

To keep current with the excitement surrounding this screenplay and the upcoming performances “like” The Bachelors Screenplay on Facebook.

Contributed by The Hays

1 Response to The Bachelors – Coming to the Opera House