This Saturday is Gallery Night in Mineral Point (most shops are open until 9 p.m.). But before you wander through the galleries featuring works made from clay, paint, metal, glass, wood and fiber, check out the event that kicks it off – the Art in Motion Parade  –where, well, anything goes. High Street Beat recently talked to Claire Johnston, the mastermind behind the parade.

Hi Claire, tell us a little about yourself.

Claire: I grew up and went to school here. After graduation I moved to Madison and I lived there for a few years, going to school on and off. I moved back to Mineral Point about six years ago to help take care of my grandma, who had dementia and was living with my parents. After she passed away, I moved back to Madison for about a year before I decided that I really loved Mineral Point and I’d like to move back here, so I did! Since my move back I’ve been managing my family’s business at the top of High Street, the Johnston Gallery. I enjoy the gallery and have been on a few buying trips with my mom to various places like New York City and Philadelphia, looking for new artists for the stores. I live here with my two (beautiful) cats, Tallulah and Oscar and a few goldfish. 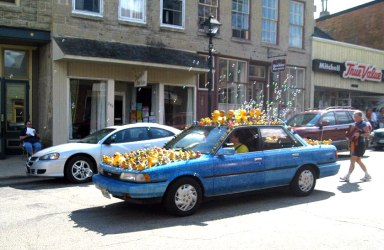 The first Art in Motion Parade was in 2011. What gave you the idea to start it in the first place?

Claire: To begin with I have always loved art cars. Always. When I first got my drivers license I went a little crazy with the decorations. I had buttons all over the ceiling and designed magnets that I used to decorate the outside of the car. I remember going to the Rock and Roll Hall of Fame when I was much younger and seeing Janis Joplin’s painted Porsche and thinking, I need a decorated car just like that. Three years ago I was talking with my mom and (then chamber director) Joy Gieseke about art car parades, and it just kind of clicked that Mineral Point would be a perfect place for such an event. Poof! The Art in Motion Parade was born.

What are some of the craziest costumes or floats you’ve seen at the parade?

Claire: One of my personal favorite entries from the past two years has been a car from Madison. The car’s name is Claire (not why it’s my favorite, just a weird coincidence) and she has small toys and things glued all over. It sort of looks like a robot-esque car. We also had belly dancers the first year (and this year too!) and they were such a huge hit. Many people have told me they were a favorite of theirs. I just really like the fact that the Art in Motion parade is so different from other parades. People really put on their creativity hats and it makes the event one of a kind.

What costume would you like to see that has yet to be attempted?

Claire: I don’t really have any one thing in particular that I’d like to see someone do, I just want to be surprised. I think that is one of the best things about having a parade like this – the element of surprise. Not knowing what costumes are going to show up is half the fun!

Will you be in costume this year, or are you too busy as the mastermind behind it all?

Claire: Yes, yes I will be in costume this year. Keep your eyes peeled for me. I’ll be there, but my costume will remain a secret until Saturday! I’m usually the caboose of the parade, as I am indeed busy lining people up and trying to keep it all running at a steady pace.

There were three dragons in the first parade. Bubbles were very popular last year. Do you see any trends heading into the third parade?

Claire: There does always tend to be a theme for the parade. Usually an unplanned theme. This year I imagine will be no different, however it is hard to say at this point because I’m not entirely sure what all the groups have planned. Like I said before, the element of surprise is half the fun!

The parade rolls down High Street and begins at 4 p.m. Participants should gather at 3:30 p.m. at the Methodist Church at the top of High Street. If you haven’t joined yet, why not? It’s fun and it’s free! Email Claire at artinmotionparade@gmail.com to sign up, and if you need some inspiration, check out the Art in Motion Parade Facebook page and this video from the 2011 parade.