Comet ISON Due Later this Year

Posted on September 16, 2013 by mineralpoint

You may have heard in the news this spring that a comet will be visible later this year.   Comet ISON (named after the International Scientific Optical Network, the observatory which discovered it) is currently approaching the sun at over 60,000 miles per hour.   It’s an object about 4 miles in diameter made of many different materials including rocks and water ice.  This comet is called a ‘sungrazer’ because it is going to pass very, very close to the sun- in fact it will be less than 1 solar diameter (the width of the sun) at its closest pass.  At that time, it wil be traveling at over 400,000 miles per hour and will experience temperatures hot enough to melt iron.

If this relatively small ‘dirty snowball’ survives its close encounter with our nearby star, it has the potential to be a terrific sight in the night sky starting in early December when it emerges out of the glare of the sunlight just before sunrise.   For most of December it will only be visible before dawn, but it will gradually rise earlier every day until it becomes visible all night long in the northern hemisphere by the end of 2013.

The comet will be at its brightest early in December, but with luck it will remain visible without binoculars for several weeks and will remain a good binocular object for several months in early 2014.

The media initially reported outrageous claims about this comet including claims that it would be brighter than the full moon, it would be visible during the day and would be so bright at night that it would cast shadows on the ground.   Unfortunately these claims have very little chance of coming true, but this is likely to be a very nice sight nonetheless.

I have been monitoring this comet from my observatory periodically since January.   Here is a picture of the comet that I took last Friday, September 13.  This image is made of 45 separate 1-minute exposures through my telescope which I combined with software to show the comet as well as I could.  The streaks in the picture are background stars that shifted position between each individual picture of the comet. 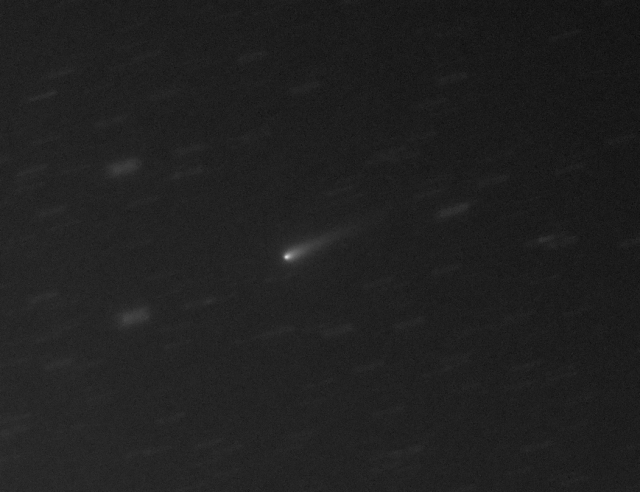 Like Loading...
This entry was posted in Outdoors and tagged Astronomy, Comet, ISON, Stargazing. Bookmark the permalink.

1 Response to Comet ISON Due Later this Year