Yesterday I was manning the candy store, playing Candy Crush (I like to think of it as market research) when two young couples from Madison walked in. They were killing time as they waited for a table at Kusaka. One of the women casually mentioned that there was a rainbow outside.

At this, I said “I’ll be right back” and ran out the door with my iPhone.  As I fled, I heard one of them say, “Don’t worry, we won’t steal any candy.”  Even though I had just met them, that seemed like sufficient reassurance. 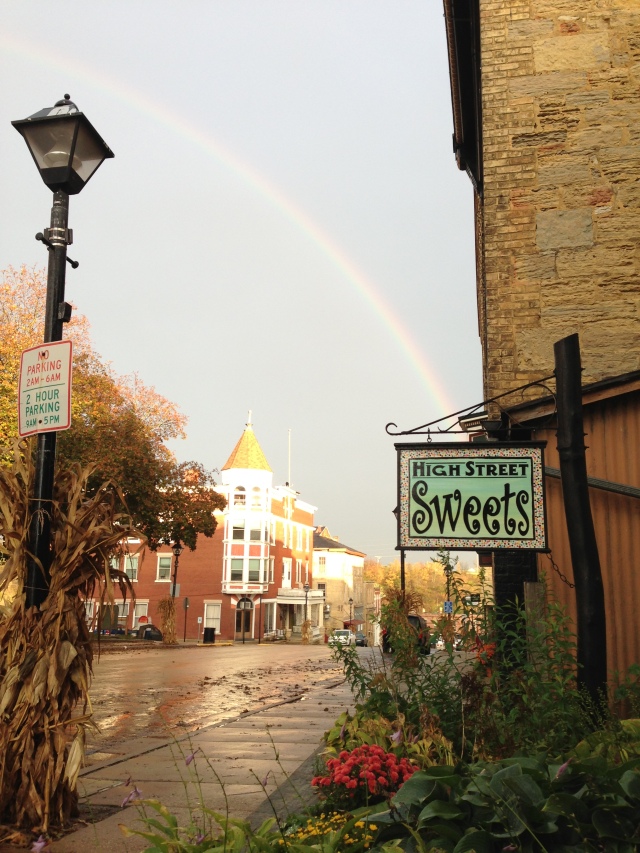 I took this shot right outside the store, but knew it would be better if I went in the middle of the street. (There’s not much traffic on a Sunday night.)

The rainbow was so perfectly hitting the center of the hill, that I couldn’t believe it. Mineral Point has a magical, other-worldly quality, which this rainbow seemed to capture.

I realized the shot would be better the higher I went up High Street. So, I ran a little further up the middle of the street and took this picture.

I would have kept going, but I didn’t want to completely abandon the store.

Before heading back in, I took this 10-second video.

I was tempted to say something during the video, but I kept thinking about the Complete Double Rainbow Guy. So, I kept my yap shut.

When I returned to the store my customers didn’t treat me like a total nut job, for running out of the store and up the street. They bought some old-time candy and of course, some Skittles, which made the moment even sweeter.

Like Loading...
This entry was posted in Outdoors and tagged Lisa Hay, Mineral Point, Rainbow, Wisconsin. Bookmark the permalink.

6 Responses to Taste the Rainbow