An Evening of Friends, Pints and Ghostly Tales

There are plenty of places to grab a drink in Mineral Point, but this weekend let’s meet at The Cabinet Shop.

Alley Stage presents “The Weir,” a play by Conor McPherson about four friends who gather at a dark pub in the Irish countryside to welcome a mysterious stranger.

Adding Irish authenticity to the show is Becca Williams, who was born in Wisconsin, spent her teen years in Ireland, and moved to Mineral Point last year. In addition to playing Valerie, the mysterious stranger, she is also the dialect coach for the cast of friends (played by Caleb Stone, Sam Murn, Glenn Dunne and John Lohmann).

This is my second. I was in “Picasso at the Lapin Agile” last summer. I took a break over the winter in New York and when I returned, I talked to Ainsley Anderson (Alley Stage’s managing director). She convinced me to work on this show and help with accents.

In “The Weir,” you are cast as a mysterious stranger who drops into a rural Irish pub. Can you elaborate?

Alley Stage will convert The Cabinet Shop into a country Irish pub.

Yes, that is pretty much my role in Mineral Point society too – just showing up. My character Valerie blows into town, into this small Irish community, which is similar to the community I lived in. The nearest major city, Sligo, was half an hour away. In the play it’s this small man-bar, so it is a big deal that this woman arrives alone with no husband that we know of. Towards the end, the tale unravels and you find out why she’s there. If you enjoy a good story, definitely come. It is perfect for Halloween.

Your Irish background is being put to good use in this play.

Ainsley put me in charge of coaching the actors on accents and dialect and I’m really impressed with how genuine some of the Irish accents are. There are some Yooper accents, and it took me a month just to get them to the Midwest. But there is no Tom Cruise “Far and Away” here. If you want the genuine feel of an Irish show, this is working. The tone of the show is very relaxed and it evokes the nostalgic feelings of old Irish stone cottages, latches on the doors, peat in the fire.

The play is set in a bar. What are some of the differences you’ve noticed between U.S. and Irish bars?

There are a lot of similarities in country bars, like the one that is portrayed in “The Weir.” The core of the small-town local bar is the same everywhere. They are judgment-free zones, where “Yes, I’m the bartender and you are drinking here every single night, but we’re not going to talk about it. Nobody’s a drunk here.” It’s kind of treated like a safe ground. You can be 100% yourself. And it doesn’t matter how many times the bar has changed hands, it’s the same bar, the same faces.

What kind of drama training have you had?

Ireland has a great youth theater program (NAYD), which has at least one group in each county. I participated in that, and then I went on to help facilitate it. When I was 18, I got involved with French actors who worked with those of us that graduated from youth theater. French theater is very physical, lots of body exaggeration and I was lucky to apprentice with these actors. Then I came back to the United States in 2012 and picked up with Alley Stage. 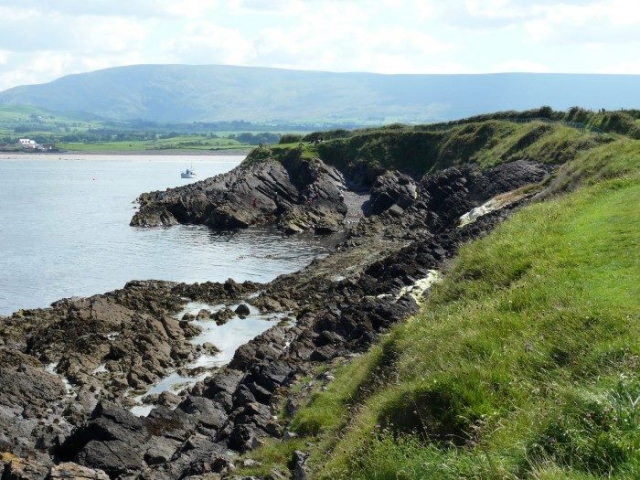 “The Weir” takes place near Sligo, where Becca lived in Ireland. Here is a snapshot of her old neighborhood.

Alley Stage gives you the opportunity to participate in outdoor theater, something you say doesn’t happen in Ireland. Why not?

The sun can be shining, and it can be raining, and there can be a rainbow and it is hailing. At the same time. It doesn’t make any sense!

We’ve had some pretty spectacular rainbows here lately. Are there really that many rainbows in Ireland, or is that just a cliche?

You get sick of the rainbows in Ireland. You don’t notice them anymore. But that’s why it’s been comforting to come to this area, because of the landscape. Mineral Point is such a gorgeous artist community, and I’ve caught the Mineral Point bug and established a home base here. It kind of reminds me of Stars Hollow from the show Gilmore Girls, with its crazy, colorful characters, newcomers that initially get the “who are you” treatment, but then become part of the town.

What’s next for you?

I recently returned to Sligo and visited my theater friends. Two of them are putting together a theater company so they can do the shows they want to do, when they want to do them, and dare to create. I plan to join them this winter in Perth, Australia, to participate in a season of theater productions, where we’ll all get the opportunity to act, direct and produce.

One last question. Guiness or Harp?

Guinness. Harp and Beamish are disgusting. Make it your mission to avoid Guinness in a can. Draught only.