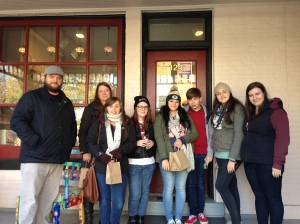 Mineral Point has a close relationship with its sister city — Redruth — in Cornwall, England. In an effort to maintain a bond with the Cornish people who literally built our town — a student exchange program was established in 1999.

Every two years, Pointer students go to Cornwall in the spring. And every two years, in the fall, Mineral Point welcomes students from Redruth. A nice group of Cornish students are in town right now. Perhaps you’ve met them. They’ve been to all the sights for the past week – and they’ll be in town until Wednesday.

For the last three trips, the Cornish students have been led by teacher John Rodgers. This year his wife Helen (pictured together at left) joins him on the trip.

A year ago, John beautifully described Mineral Point and its people in a post he contributed to High Street Beat. We are re-posting it for anyone who missed it the first time. It’s clear proof of the bond between our two cities.

I write this in the first few days of October, almost a full year since I was last in Wisconsin, trying to follow Shakespeare’s lead from Sonnet 30. “When to the sessions of sweet silent thought I summon up remembrance of things past.”

And so in sweet silent thought I am standing outside the High School, at the North Western corner of Mineral Point looking away from town, North across a low valley, over the 151 and out towards Ludden Lake. The morning is cold. High above me in the pale blue ether circles a bald eagle. There is no cloud to be seen, just the endless depths of sky. The totemic bird lazily sweeps through the air, spiralling heavenward. From down here it is clear the eagle is in no hurry. His proud wings catch the rising air and his only effort is to turn and follow its ascent. He is free to survey the earth from which he came, to gaze upon the fields of corn, to watch the scurryings of those creatures beneath him. He is the emblem of a nation.

Returning to my desk from remembrance of things past I am reading ‘October’ by Robert Frost which begins;

Thy leaves have ripened to the fall;’

Begin the hours of this day slow.

Make the day seem to us less brief.

Hearts not averse to being beguiled,

Beguile us in the way you know

Retard the sun with gentle mist;

Enchant the land with amethyst.

This wonderful, elegiac poem asks of us that which comes so naturally to the bald eagle as he sails the sky wind. Take a moment, slow down, don’t rush through the day. Frost is asking us not to hurtle towards our own ends without stopping to breathe in the goodness of an autumn morning. The existentialism reminds me of a famous English poem about the Spring-time cherry blossom; different season but same message, “and since to look at things in bloom, fifty springs is little room”. Both Frost and Houseman are writing to show us the value in recognising our time is limited, short even, and that we best get on with living, we best get on with opening ourselves to nature and the natural world. We must see as Gerard Manley Hopkins saw that “The world is charged with the grandeur of God. It will flame out, like shining from shook foil, it gathers to a greatness”

And on a sharp October morning in Mineral Point there is surely no finer place to do just that.

Mineral Point is a small town in Iowa county, Wisconsin. With a population of just a few thousand, it is a quiet place. It is a place where I have found it easy to let my heart be beguiled by the enchantment of the landscape. The rolling hills, wide open country, worked and farmed by straight forward people. Deer stalking through the long grass at the edge of a wooded valley. The Mississippi, seemingly indolent and languid yet truthfully deceptive and beguiling. Even here in Wisconsin it exudes power and whispers beneath its surface waters of a serpentine, symbolic fury. The bald eagle, proud, wild, hopeful. How can a heart fail to be beguiled? Even one that is averse to such things, one that has not yet found the way to begin the hours of the day slowly? Mineral Point is enchanting. It is the amethyst of Wisconsin.

But to any jewel there are many facets, and this is true of Mineral Point also. The shining lights (shaken from the foil of the town), the glinting treasures of Mineral Point are its people. Shakespeare could have said of the town’s families that “all that glisters IS gold”. It is to the people, my friends that I return every second October. For many years Mineral Point has been twinned with Redruth in Cornwall, UK, where I live and teach. For many years the schools of Mineral Point High and Redruth School have run an exchange programme with biennial visits of one to the other and the reciprocal. We visit Wisconsin in October. It has been my pleasure to lead this programme for the last four years from Redruth. Even as I write now I am planning the itinerary for the Mineral Point students who visit in the spring.

C. S. Lewis said “Friendship is unnecessary, like philosophy, like art… It has no survival value; rather it is one of those things that give value to survival.”

Friendship gives value to our lives, friendships connect us across oceans, friendships keep calling us back together. The people of Mineral Point are unremittingly friendly. They have repeatedly opened their homes to those of us from Cornwall, opened their lives and their hearts to us and we now have the honour of calling them our friends. Mineral Point is a special place, filled with special people. I think of it often, of my time there, of my friends there. But perhaps, in these first few days of October, as I look out of my study window and see leaves ripened to the fall, the sun retarded with gentle mist, the remembrance of things past conjured up in sweet silent thought, perhaps now, I think of it more.

1 Response to Exchange of Heart