Mineral Point looks so charming at this time of the year.  If you walk up High Street, you’ll get an invigorating whiff from the fresh pine garlands with red velvet bows decorating the shop windows.  Right now, there is a nice blanket of sparkling fresh snow on the ground and it just might be the coldest time of the year.  That doesn’t mean the fun stops right there.  With the proper clothing and fine attitude, life must go on in these parts.  Last year, I remember seeing people ski up and down High Street.

Saturday was a big day for Mineral Point because of the annual Candlelight Shopping/Gallery Night.  It’s one of my favorite events in town.  The streets were aglow with luminaries and people were just so cheerful and friendly.  The first big smile I spotted was Julie‘s.  She caught my eye because she was wearing a rabbit’s fur hat just like I was.  We gave each other a big hug and, of course, took a picture together.  Down the street a bit, my partner in crime Keith and I  visited with Jony and Phil at  Simply Scarfs who were celebrating the 5th anniversary of their business.  Even chef Hiroko next door was caught up with holiday cheer.  I spotted her in front of her restaurant, Kusaka, taking a picture of the street without a coat on!  I imagined that Wisconsin winters must make a Japanese winter feel like springtime.  Later on, we walked down to High Street Sweets and got a piece each of Gail Ambrosius’ chocolate covered caramels sprinkled with sea salt.  (Chocolate is a must if you want to survive the winter, period.) 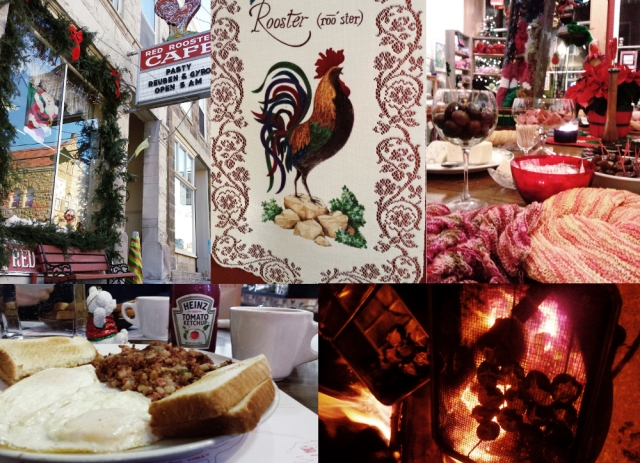 One street over, De La Pear was abuzz.  Local musician Grace Coyne set the mood with her holiday music and my good friend Brett Hermanson had his first art show (a photography collection called “Angels & Flowers”).  The ladies at De La Pear had a fine spread of nibbles including some delicious apple pastries with caramel sauce from the Mineral Point Dining Company.  Another highlight were some fine cheeses from the Thuli Family Creamery in Darlington.  A few sips of brandy made everything look extra sparkly and I believe I even spotted Mr. Scrooge?  Did anyone else see him?  Up the street a bit was Longbranch Gallery.  We especially love Tom Kelly’s whimsical figures and paintings and Keith Huie’s often giggle inducing artwork.  We later wandered into Ifinder Antiques and admired some ornate wooden combs which reminded my friend Christy of “The Gift of the Magi” story.  Afterwards, we visited the cozy fire on High St. where several people from the Kiwanis Club were roasting chestnuts.  Our group agreed that they were the best chestnuts we’ve had out of all the other Candlelight Shopping nights we’ve attended in the past years.  Inside Wantoot, I drooled over some avant-garde jewelry. Our traditional last stop is always Brewery Pottery.  Tom and Diana Johnton are among the warmest people we’ve met.  For me, Brewery Pottery feels and looks like a giant jewelry box.  After a cup of intoxicating hot cider with extra cinnamon and a fine chat, I was ready to go home.

The day after that, snow started to fall.  In the afternoon, I sang in my second performance of Handel’s Messiah over the weekend sponsored by the Rural Musician’s Forum.  For dinner, we warmed our bones with a lovely meal at Kusaka.  Right as we walked in, Chris suggested that I try the Corvina.  Every weekend, they have fresh fish.  I really enjoyed my perfectly pan fried fish on top of steamed rice.  I loved the faint crunch from the almost non-existent breading.  It was served with some pickled vegetables and a bowl of miso soup.  Keith got his usual, miso ramen.  Another delicious, “new to us” menu item was the shrimp dumpling.  It was a great way to end our weekend.

What were the highlights of your weekend in Mineral Point?