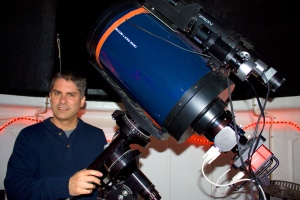 There is a possibility of a new meteor shower Friday and Saturday evenings, May 23 and 24.  Scientists at NASA have calculated that Earth will be traveling through a debris cloud from comet 209P/LINEAR.   This is the 1st time Earth will enter this cloud.   There is a possibility that we could see a significant meteor shower rivaling the August Perseid shower.     The best time to view the shower will be after 1am our time and the forecast is for clear skies Friday evening.

There is a slight chance that this could even generate a meteor ‘storm’ of several hundred meteors per hour or more, but there is an equally good chance that no meteors at all will occur.  It all depends on how active the comet was in the 1800’s when it crossed this part of the solar system- there are no good records of this comet during that time, unfortunately.

If you would like to join our club for observing the showers, feel free!   We will be having our club meeting Friday at 7:30pm at Bethel Horizons just north of Dodgeville.   After the meeting we will be observing in their large open field.   We will also have our big 17″ telescope to look deep into the universe.

Like Loading...
This entry was posted in Outdoors and tagged Camelopardalids, Iowa County Astronomers, meteor showers. Bookmark the permalink.