The Mineral Point Opera House is excited to welcome The Grand Marquis and Point Five for a show on October 18 at 8PM. Point Five will play an opening act followed by The Grand Marquis with the two bands playing a few songs together to end the show. Tickets are $15 and are available at Berget Jewelry in Mineral Point, or online (click here) or at the door. Beer will be available at the concession stand. 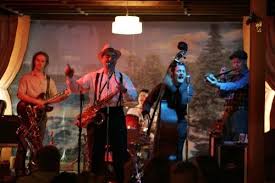 The Grand Marquis have that classic, timeless ‘straight-from-the-Kansas City-speakeasy’ sound while injecting a vibrant relevance into their brand of hot swinging jazz & jumping blues. Versatile and buoyant, distinct and refreshing – a rhythm cocktail served by masterful musical mixologists.

The Grand Marquis’ music can bring to mind a variety of settings and places as well: Prohibition-era KC, the streets of New Orleans, 1950’s Memphis and even 1930’s Paris. But their sound remains grounded in a roots influence that keeps inspiring the Grand Marquis to create, innovate and build off a solid foundation of American music. Theirs is a style that defies the limitations of category, whether jazz, blues or swing, yet finds favor with a wide audience culturally, demographically and intergenerationally.

Like the city of Mineral Point itself, the local music group known as Point Five is an interesting example of the meshing of various backgrounds. Their individual histories are diverse, yet a common interest in playing ensemble acoustic music drew them together.

Point Five has been playing together in their current incarnation since early 2010, and their set list has evolved to include moody versions of music from The Weepies and Kate Campbell, covers of American primitive songs by Gillian Welch, narrative tunes by John Hiatt and Vance Gilbert, as well as and rollicking jam-based covers of Gomez, Ryan Adams, Nickel Creek, Alison Krauss and Union Station.

Like Loading...
This entry was posted in Entertainment and tagged Mineral Point Opera House, Point Five, The Grand Marquis. Bookmark the permalink.