Max Fernekes (1905-1984) was one of Mineral Point’s first artist residents, paving the way for future generations that have transformed Mineral Point into an artists’ haven. Max’s drawings, paintings and prints are a beautiful record of Mineral Point in the 1940’s and the three decades that followed.

Right now, at Pendarvis there are thirty-one of Max’s artwork shown side by side with present day photos of the same locations, in an exhibit called Location-Location: Max Fernekes Mineral Point, 1940 and Now.

The exhibit demonstrates that Mineral Point hasn’t really changed much since 1940. The stone houses are just as quaint. The hilly streets and rural vistas are still beautiful. 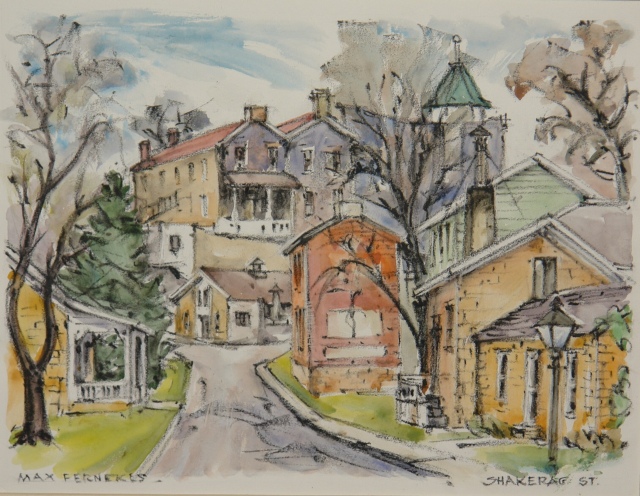 The exhibit also demonstrates how much Max Fernekes loved Mineral Point. Max and his wife Ava chose to move to Mineral Point from Milwaukee in 1939 and raise their two daughters here. They purchased a dilapidated stone house and managed to rehab it with the money they earned selling their art. Max’s rendition of the family home on Pine Street, on loan from their daughter Barbara Fernekes Hughes, is part of the exhibit.

Max’s colorful depictions of Mineral Point have an enchanting, other-worldly quality, especially when compared with the modern-day photographs. For example, here’s one of Max’s paintings of Polperro and Trelawney at Pendarvis.

Here they are now.

Max’s block print of the gray dog on High Street.

In few cases, Max’s work alongside the present-day view serves to document buildings that were altered or no longer exist. That is the case with these two buildings on Shake Rag Street. 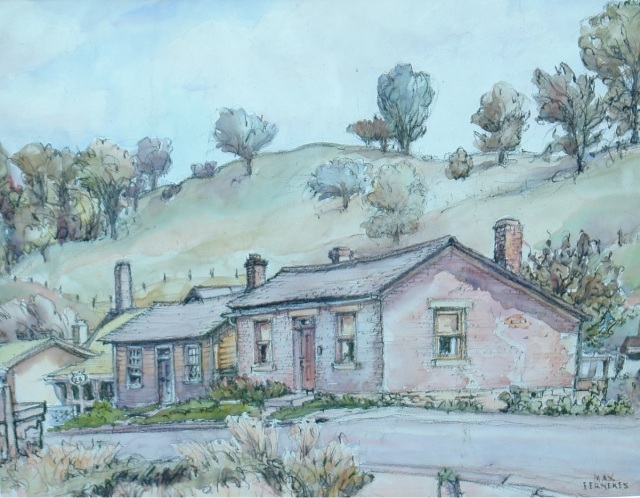 The same view now shows that the houses are gone.

You can see the exhibit at a special price ($2.50) without going through the entire Pendarvis tour. Although if you haven’t taken the Pendarvis tour in awhile, you might want to see the updated version.

Today, June 7th is Pendarvis’ Visitor Appreciation Day, so the normal $10 ticket will be only $2.50.

The exhibition, Location-Location: Max Fernekes Mineral Point, 1940 and Now was initially conceived as a complement to the publication of the biography of Max and Ava Fernekes that Cliff & Michele Krainik of Warrenton, Virginia had been working on for over ten years. Although this endeavor has not yet been published, Michele passed away in the summer of 2014 and so the exhibit now stands as a memorial to her abiding interest in Mineral Point and the artistic careers and love story of Max and his wife Ava.

If you love Mineral Point, you will love this exhibit, which will be on display from now through November at Pendarvis, 114 Shake Rag Street, open daily 10 a.m. – 5 p.m.

– Contributed by Lisa Hay, with assistance from Cliff Krainik