Posted on September 15, 2015 by mineralpoint 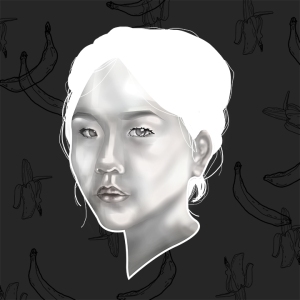 Since she could remember, Diana Chu drew constantly. She would accompany her mother to her office and draw while she worked. As her mother typed, Diana would open an umbrella to create a fortress where she armed herself with markers, tape, scissors and old computer paper to make puppets, invent games and scribble. At the ripe age of six she told her mother that she wanted to be a painter when she got older and her mother responded, “Diana, you will die from starvation in an attic at twenty-one.”

Apparently, her mother’s response did not deter her. On Friday, September 18, 2015 at 6 pm Diana’s one-woman show opens at the Green Lantern Gallery in Mineral Point, Wisconsin.

Diana developed her artistic aesthetic while living ten years in Hong Kong and as a student at Washington University in St. Louis’s Sam Fox School of Art & Design. She explores visual, poetic, and material arts with a deep reverence for traditional craft and analog media. An observationist to the core, Diana strives to expose true yet shifting identity through portraiture.

She manifests the human figure with loose realism and soft androgyny, creating caricatures of society’s deviants that resonate with both poignant recognition and autobiographical familiarity. Diana’s work is often contextualized by the melancholic themes of blank mortality, lonesome joy and impersonal nature.

During the monthlong show Diana will be displaying oil and mixed-media paintings, hand-woven tapestry, life-size body prints and batik hangings. Also included will be hand-painted leather jackets and bandanas as well as copies of her new book, Wow, Very Creep: 100 Illustrated Haikus.

Like Loading...
This entry was posted in Art and tagged Diana Chu, Green Lantern Studios. Bookmark the permalink.