Posted on December 8, 2015 by mineralpoint

Join Katie Burns as she celebrates the release of her album Weighted Balloon at 7 p.m. Saturday, Dec. 12, at Brewery Pottery. Katie will be accompanied by Eric Miller and Michael Sherry.

Weighted Balloon is Katie’s third album. Katie teamed up with Ben Brodin of ARC Studios in Omaha, Neb., who also produced Throw the Flowers Down. Read about that album here. Her angelic voice is backed by Brodin and the stellar Eric Miller of Madison, who plays cello and trumpet and has performed many times with Katie in Mineral Point and around the area.

Katie used vintage equipment in the studio, giving the recording a rich and timeless sound, which turned her thoughts to pressing vinyl. “The vinyl sounds magical,” Katie says. “I can’t explain it. When we finished the project Ben really encouraged me to press the vinyl. He was right.”

Katie’s poetic lyrics seem simple, but they cut right to the things that matter. Her songs are about relationships – with children, parents, lovers, and one’s own self and place in the world. Her songs search for what’s important, and reveal more depth with each listening. 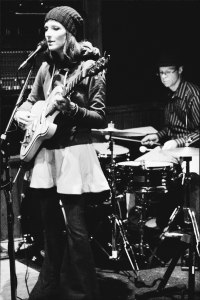 And if excellent music in a magical setting with artisanal cheese and homemade cider aren’t enough — along with the chance to buy Katie’s new tunes on vinyl — audience members will also get to take part in a music video for a song that I think is about keeping on with life, noticing the magical and simple things all around us, and taking comfort in these words: “And we are enough … we are enough.”

Details: 7 p.m. Saturday, Dec. 12. Brewery Pottery, 276 Shake Rag St., Mineral Point. CD and vinyl copies of Weighted Balloon will be for sale. Children are welcome. Bring your snow globes for the video, but if you don’t have one there will be plenty to share. Visit katieburnsmusic.com and like Katie Burns Music on Facebook.