Get Your Costumes Ready!

There are three FREE fun Halloween events coming up. 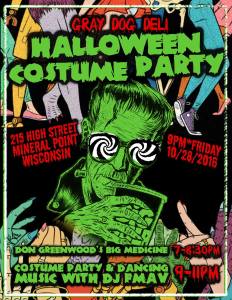 Don Greenwood’s Big Medicine will be playing live from 7.30pm, followed by DJ FMAV spinning discs from 9pm till late. There will be a contest for best costumes, with prizes being awarded by judges, Brian and Diane Stuart. Loads of snacks including the puking pumpkin – spewing guacamole – gross, great, and delicious. Creepy yummy treats and spooky drinks. Everyone welcome, and it’s free! (Thank you to Lily Bragge for this contribution and for encouraging a HSB post.) 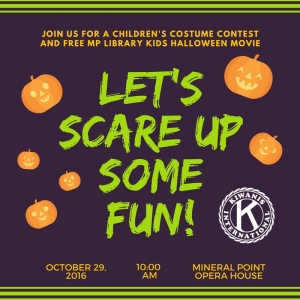 Head to the Mineral Point Opera House for this annual event sponsored by the Mineral Point Kiwanis and MP Public Library. Guests will receive a ballot to vote for the Spookiest, Most Creative, Funniest, Cutest, and Best Overall Costumes as the children make their way across the Opera House stage. Following the costume parade, a fun and short (30-minute) movie will be shown. Costume winners will then be announced and the children will be invited to Library Park which will be transformed into a colorful pumpkin patch thanks to the Mineral Point Key Club. Each child will be allowed to take home a little painted pumpkin. 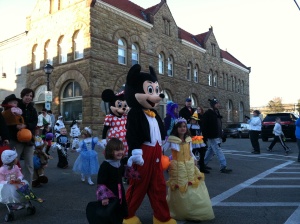 Meet on the corner of High and Iowa Streets at 5pm to take part in the traditional Halloween Parade down High Street followed by Trick-Or-Treating around town from 5-7pm. Make sure to stop by Shake Rag Alley for friendly (not scary) costumed characters passing out Halloween treats at each of the historic buildings.

Everyone is welcome at all events!